*predicted path at this point – China will also be affected. 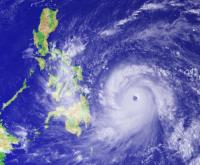 The category 5 typhoon made landfall near Guiuan on Eastern Samar at 07.11 at 20:40 UTC and hit with the strongest landfall wind speeds ever observed. Previously, the typhoon had hit the small nation of Palau causing some damage. Wind gust speeds reached a predicted 380 kph shortly before impact.The warm sea water and low wind shear has contributed to the maximum intensity of this typhoon before landfall. The central pressure was estimated 885 hPa (according Joint Typhoon Warning Center), which makes it only the 5th in 25 years in the Western Pacific to do so (Megi 2010, Flo 1990, Ruth 1991, Yuri 1991). The wind speeds have dropped significantly to around 150 kph approaching Vietnam and Southern China (Hainan). Typhoon dissipated 11.11. over China.

The capital stock of the affected locations is around $104b with the GDP being around $31b with approximately 17 million inhabitants. Leyte was the first hit with destructive force (1.5 million inhabitants) with Tacloban City worst affected (220,000 inhabitants). Most houses will not withstand winds of over 200 kph, thus destruction in the eye of the typhoon will be close to 70-80 % as confirmed by police officials in the affected regions.

What have been the 2 largest comparable damaging events in the past? 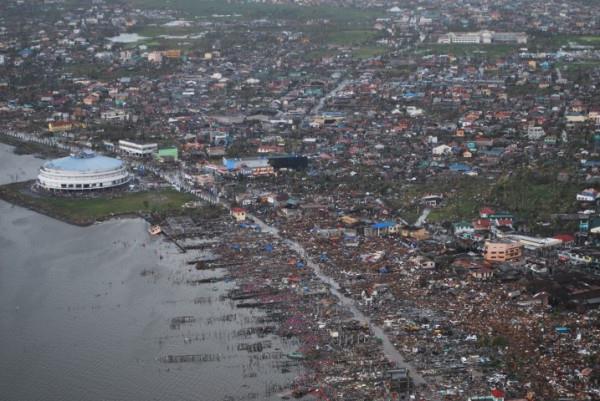 Public infrastructure damage has occurred, as well as total destruction of many industries. Sugar cane and rice production losses will be nearly total through this region – accounting for 50% and 33% respectively of the Philippines. Bloomberg currently estimates around 14% insurance losses as a percentage of total, however less is expected.

A catastrophic typhoon has hit Philippines, Palau, and will continue on to Vietnam and China. Over 13000 are presumed dead in Philippines with over 2.1 million homeless and between 3 and 5 million currently displaced (1.18 million on Panay Island). The economic cost will be the largest ever in terms of Philippines typhoon losses with around $13.6b USD or 590 billion PHP expected losses (which would be 10 times larger than historic typhoon losses).
CATDAT Economic Storm Rank 10: Catastrophic
CATDAT Social Storm Rank: 10: Catastrophic