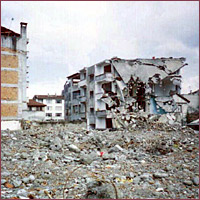 sment and mapping of the risk for all Germany. The first stage of the work is dedicated to analyses of potential direct losses due to structural damage to the existing residential building stock.

The risk is calculated from (1) intensity-based probabilistic seismic hazard, (2) structural vulnerability models constructed for the residential building stock of communities and (3) distribution of assets in terms of replacement costs for residential buildings. In parallel with the probabilistic hazard-map-based approach the deterministic scenario-based approach is used. The developed models are calibrated and validated with the use of observed data from several damaging earthquakes in Germany and the nearby area.
The planned activities include, inter alia, consideration of other probable direct and indirect losses, industrial and public buildings, infrastructure in earthquake prone areas.

It should be taken into consideration that the level of risk (potential losses) depends not only on the level of hazard, but also on the elements at risk located in the hazard prone areas, including their value and vulnerability (Figure 2). And the level of risk is higher if the hazard coincides with higher concentration of exposed assets. Therefore the risk analysis and risk management should include consideration of all relevant factors contributing to the risk level. 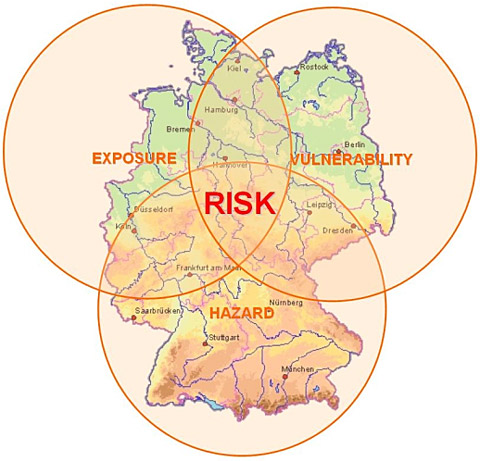 Strong earthquakes can influence different aspects of society’s life. Correspondingly, the risk estimates can be described in the form of structural damage to buildings and structures, social (injured and killed people) or economic (monetary losses) impacts. The currently obtained estimates of seismic risk for Germany take into consideration only primary economic losses due to structural damage to residential buildings. 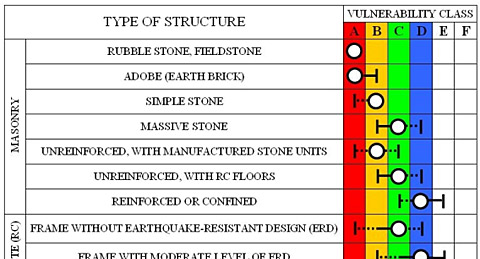 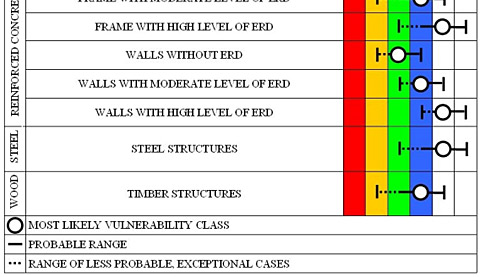 The whole family of 13490 communities of the Germany was assigned into five classes, depending on the number of inhabitants. For each of the community classes the vulnerability composition models describe the building stock in terms of the EMS-98 vulnerability classes (Tyagunov et al, 2006) (https://www.nat-hazards-earth-syst-sci.net/6/573/2006/nhess-6-573-2006.pdf). The vulnerability composition models presented in Figure 3 were used for damage and risk analyses in the study. 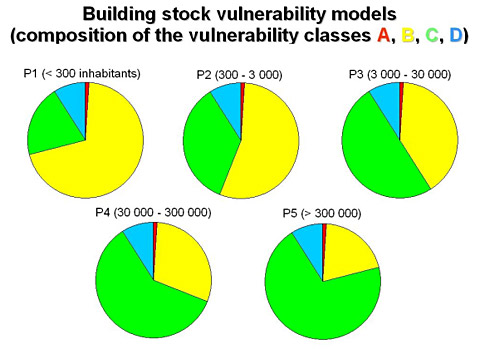 The estimates of assets are obtained by the Asset Estimation Group of CEDIM (Kleist et al, 2006) (https://www.nat-hazards-earth-syst-sci.net/6/541/2006/nhess-6-541-2006.pdf) and quantified in terms of replacement costs for residential buildings for the reference year 2000. The total asset values in a community depend on the number of inhabitants and vary considerably from small villages (order of millions of Euro) to large cities (order of many billions of Euro).

For estimation of probable damage and losses from potential future earthquakes the hazard, vulnerability and asset data are integrated on a GIS platform. Combining the hazard input with distribution of communities of different classes and corresponding vulnerability models, the distribution of probable damage to the residential building stock is obtained. Further, combining the damage estimates with the asset values, the corresponding losses are obtained (Figure 4). 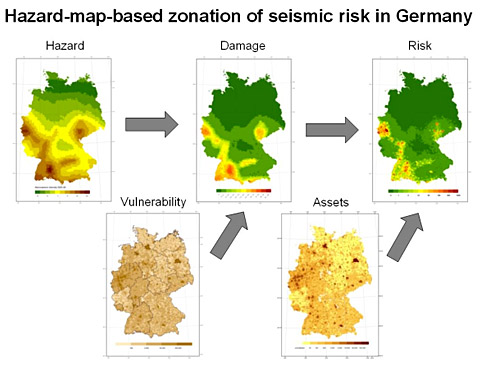 The computations are conducted for all 13490 communities of Germany, resulting in a map (Figure 5), which shows spatial distribution of seismic risk in the country. The level of potential losses in different communities varies from zero to hundreds of millions of Euro. There is no risk in the areas with the expected level of seismic intensity V or less, which causes no damage to buildings. No risk exists in uninhabited areas, where there are no asset values. On the contrary the highest level of risk is generated by combination of a higher hazard level and a higher concentration of exposed assets.

It should be emphasized that the obtained estimates correspond to the hazard level of a non-exceedance probability of 90% in 50 years (a mean return period of 475 years). The damage and loss estimates would change for other hazard levels.

In parallel with the probabilistic mapping of seismic risk the approach can be applied for the deterministic earthquake scenarios to estimate the level of damage and losses from single seismic events.

More detailed description of the approach as well as some additional results obtained by the earthquake team of CEDIM can be found in the article of Tyagunov et al (2006) (https://www.nat-hazards-earth-syst-sci.net/6/573/2006/nhess-6-573-2006.pdf).

International Association of Seismology and Physics of the Earth's Interior (IASPEI)
https://www.iaspei.org/