Within the project HARIS-CC (Hail Risk and Climate Change), changes of the hail hazard are quantified from an ensemble of high-resolution regional climate models. This work is complemented by the area-wide assessment of the hail hazard and risk in Germany within the frame of a joint project funded by the SV SparkassenVersicherung AG (HARIS-SV).

Description of the project

In recent decades, severe hailstorm increased significantly in Southern Germany, Austria and Switzerland and has become one of the natural hazards with the highest annual amount of loss (Kunz et al., 2010). Total damage caused by severe hailstorms reaches a magnitude that is only exceeded by large-scale winter storms. However, the spatial extent of the hail tracks and, consequently, the damaged areas, are strongly limited, with widths from a few 10 m to several 10 km.

Due to their local-scale extent and a lack of appropriate monitoring systems, thunderstorms and hailstorms are not captured completely or not long enough to derive any conclusions about possible trends. However, certain atmospheric conditions are necessary for the formation of thunderstorms, which can be derived as proxy data (indirect climate data), for example from radiosonde measurements or from regional climate models (Kunz, 2007). In contrast to thunderstorm observations, proxy data such as thunderstorm indices orlarge-scale weather types are consistently and homogeneously available over a sufficient long-term period and, thus, are also suitable for trend analysis.

Statistical analysis of long-term time series of convective indices, which mainly consider near-surface temperature and humidity, show an increase of the convective potential in recent decades (Mohr and Kunz, 2011). In contrast, considering indices that reflect higher layers of the atmosphere, this positive trend only arises for the last 20-25 years. According to the analysis, a change in the direction of the trends arises over Germany (and Europe) in the past 50 years. While the potential for thunderstorm development was lower in the 60th and 70th, it increased significantly in the 90th.

A similar picture emerges for the large-scale weather types, which were determined from both reanalysis and different realizations of regional climate models (Kapsch, 2011). Four of the 40 different weather types are related with an increased likelihood of damage-related hail events. These four types have only slightly (but statistically significant) increased within the period from 1971 to 2000. For the future (2010 to 2050), the model data only show a small increase of these hail related weather types - but this is strongly dependent on the period considered. 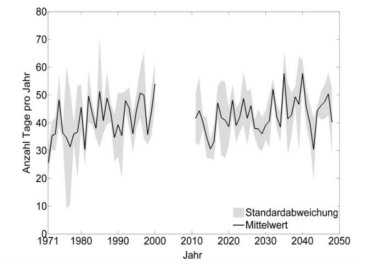 Picture 1: Time series of hail-related large-scale weather types according to the objective weather classification of the German Weather Service (DWD) with annual mean (black) and standard deviation (gray) from seven different regional climate models; the x-axis indicates the year and the y-axis the number of days per year (Kapsch, 2011).

Currently, simulation results of different high-resolution regional climate models are analyzed statistically with respect to changes of the convective potential. Within the project HARIS-CC, climate calculations performed at the IMK by the Working Group "Regional Climate and Water Cycle" as part of the CEDIM project Flood Risk in a changing Climate" are an essential component. Various suitable atmospheric indicators (e.g. convective energy, moisture flux convergence, large-scale weather situations, etc.) are analyzed using logistic regression in terms of their predictive skills for hail. 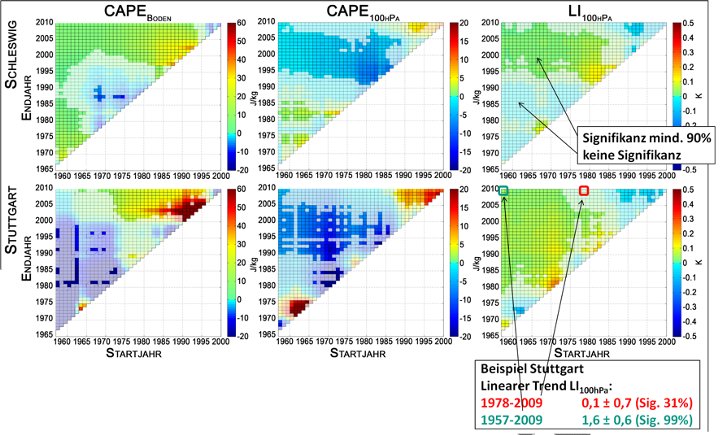 Picture 2: Linear trends per year for varying periods of time (minimum 10 years) for individual convective indices at the sites Schleswig and Stuttgart; the x-axis indicates the beginning and the y-axis the end of each time series. 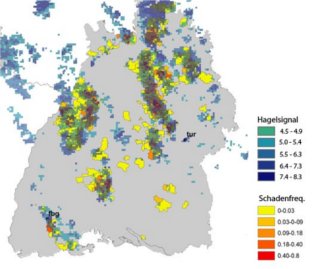 Picture 3: Hail criterion (difference in height between   0 °C and 45 dBZ; bluish colors) for Baden-Wuerttemberg on the 29th/30th of May 2008, derived from DWD radar data with the loss frequency of building damages according to insurance data (reddish colors).

In the frame of the project HARIS-SV project in cooperation with the SV SparkassenVersicherung AG, analyses of the hail hazard and damage effects on buildings are currently performed for the federal states of Baden-Wuerttemberg, Hesse and Thuringia. From the intersection of radar data, model data and insurance data, a comprehensive event catalog of past significant hail events including their tracks and intensities are created and processed by appropriate statistical methods. These studies will provide important information about the spatial distribution of frequency and intensity of hailstorms and, thus, enables identification of regions highly exposed to hail.

Based on the event catalogue, a hail damage model will be designed in the next step, which links loss data and meteorological measures, for example, 3D radar reflectivity. Based on the SV portfolio, total losses of single severe events and expected losses for certain probabilities (return periods) can be estimated from the loss functions.