The project “fragility and vulnerability” deals with the estimation of structural damages at the building stock in case of seismic impact. In cooperation with the German Aerospace Center (DLR/DFD) the development of fast, robust and automated or semiautomated methods for a quantitave estimation of possible direct damage using information derived by satellites is the main goal.

Urban areas especially in developing countries suffer from rapid changes due to explosive immigration and sprawl. Expectations predict an almost complete absorption of the world’s population growth between 2000 and 2030 by urban areas in less developed regions. One out of every two large cities in the developing world is vulnerable to natural disasters such as floods, severe storms, landslides and earthquakes. This project presents an interdisciplinary approach combining remote sensing and civil engineering to assess vulnerability in urban areas. The aim is to develop new methodologies as well as interfaces to benefit from the potentials existing in both sources. It is shown how complex urban characteristics are classified area-wide from high resolution satellite imagery. The relevant building classes are allocated through analysis of the thematic urban land cover classification by parameters like roof type, building height, age, density and others. These parameters serve as input to estimate the behaviour of structures affected by natural disasters. Final result is the expected risk as an interaction between physical hazard and vulnerability. It is precisely the use of area-wide information from remote sensing and the adaptation of civil engineering methods which are the important improvements and indicate the future for vulnerability assessments.

Risk can be defined as follows:

with:
H = Hazard
E = Element of Risc
V = Vulnerability of the Element

Hazard describes the potential of an impact including the probability of occurrence. In this study we take into account only seismic inputs. In case of an supraregional analysis of urban areas like the city area of Istanbul an investigation of the building stock using images collected by airplane or satellite has many advantages. It is possible to derive areawide and up-to-date information for the approach.

In a first step the landcover is classified on the base of high definition satellite imageries, made by IKONOS or QUICKBIRD: 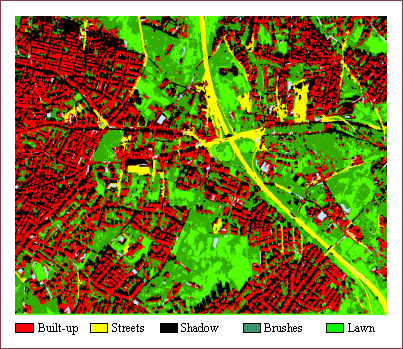 The landcover-classification, clearly displaying the built-up areas, is the initial point for the constitutive analysis of further properties of the building stock. At the actual phase of the study parameters like the density of the buildings, the age, the groundplan, the height and the rooftype are input parameters for the analysis.
By analysing surveys and cadastral datasets it is possible to find connections between the parameters mentioned above and the type of the building. A classification of different buildings into the following classes is possible: 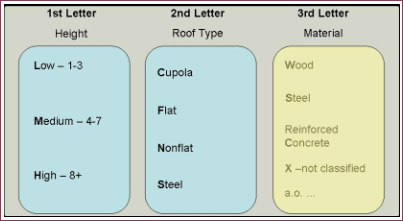 Vulnerability curves considering the distribution of the design features of the building stock are applied:

Monetary values of the elements at risk can be estimated on base of numerous (~20,000) prices of real estates, sorted per district.
Fullfilling the definition of risk or direct damage it is possible to estimate direct losses: