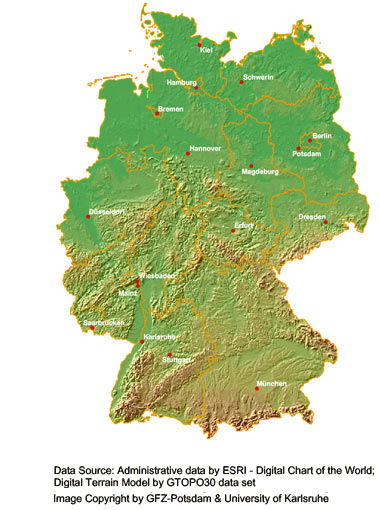 In Germany, the relevant natural hazards are storms, flood, earthquake, heat and frost. According to the reinsure industry (Munich Re 2005) more than 34 billion € of economic damages (in original values) were recorded during 1970 and 2004. 49% of these damages were due to storm events and 40% due to flood events. A total of 600 large natural hazard events have been recorded within these 35 year.

The main goal in the project Risk Map is to carry out an area-wide quantification of these risks. For the natural hazards winter storm, flood and earthquake as well as for man-made hazards, methods are developed in order to determine and compare the risks on a common data base. Additionally, an estimation of the assets that were affected is performed. For the German state of Saxony, the three risks are compared for every single municipality by the synopsis group. The risk calculation refers mainly to direct damage to private buildings. In the infrastructure group, the impact of earthquake and flood events to the transport network is investigated.

All these subproject are supported by the data management and GIS group which is responsible for the management and storage of geo data. The group provides the means and knowledge for the risk explorer that visualises the result of the single hazard groups.