The research project EDIM is funded by the German Federal Ministry of Education and Research (BMBF) and is realised as a consortium of research and commercial organisations (see list below), coordinated by the University of Karlsruhe (TH).
The aim of EDIM is the expansion of the existing earthquake early warning system of Istanbul (IERREWS - Istanbul Earthquake Rapid Response and Early Warning System) to the regional scale of the Marmara Region, as well as the significant improvement of the warning information in terms of its quality.

The project is divided into three subprojects:
In Part A, estimates of the degree of reliability will be delivered, as well as real-time information of earthquake source parameters and near-real-time shakemaps for the region.
In Part B, an advanced sensor technology of self-organising networks will be developed and tested, using Istanbul as an optimal geographical test site.
In Part C, data and information coming from both parts A and B will be connected by a dynamic geo-information infrastructure and communicated with a user-oriented information and visualisation strategy. 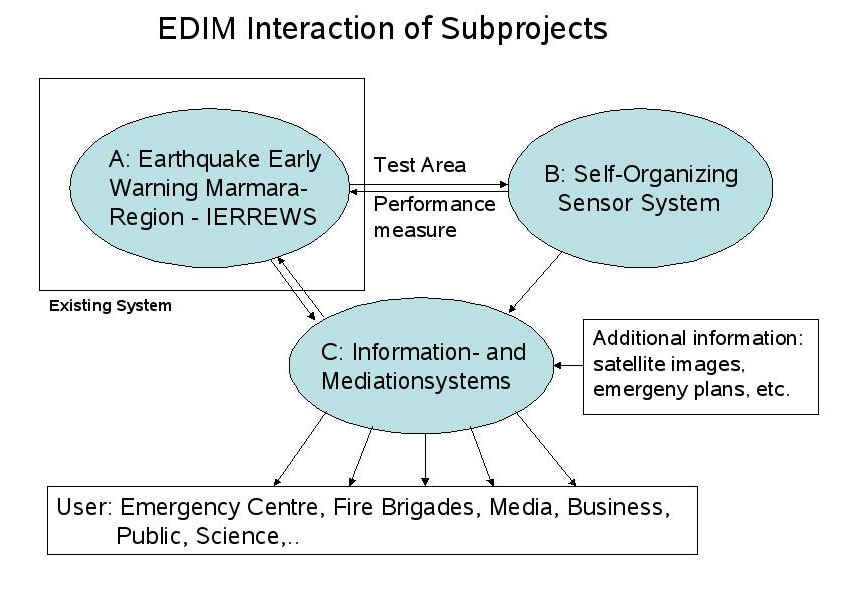 EDIM addresses real-time information in advance, during, and after an earthquake with an interdisciplinary approach: Seismology will provide novel algorithms for the rapid detection of earthquakes, source properties, and the level of ground shaking. Seismologists, computer, and communication scientists develop the new technology of self-organising networks for early warning and rapid reporting. Geo-informatics provides additional information and focuses early warning to user needs.

Substantial progress in seismic real-time acquisition and communication technologies, aside from enhancements of seismic processing software, has been made over the past few years. This paved the way for the design and implementation of earthquake early warning systems all over the world (Zschau and Küppers, 2003; Nakamura, 2004; Kanamori, 2005). Different systems have been developed. The Neural Net methodology developed in Karlsruhe (Böse et al., 2005) has been used within IERREWS, although only with synthetic data. A particular innovative and promising technique is the one of the self-organizing nets.

Part A:
(1) Expansion of real-time communication via Satellite within the existing system to the Marmara region. This step is crucial as the entire region is highly industrialized and densely populated. It will be financed by the Governate of Istanbul within 2007 and 2008. From the very beginning, the Kandilli Observatory and Earthquake Research Institute (KOERI) in Istanbul will provide internet access to its German partners to IERREWS.
(2) Optimization of the existing early warning system in terms of areal coverage and signal processing capacity. This is important as the current system operates with a very simple scheme that does not allow to fully utilize the seismological information and that does not include information on reliability of early warnings.

Part B:
The self-organizing information network is planned as an autonomous, wireless communicating mesh network which still works efficiently even in the case of failure of individual network nodes (similar to the experimental BerlinRoofNet project. To these network nodes, inexpensive seismic sensor devices are attached via USB. This builds a communicating sensor system, which is to be configured by appropriate hardware and software for application in an earthquake early warning system. Beyond that, further sensors are to be included, which can register for example building fluctuations or changes of groundwater characteristics. This requires an appropriate installation of specific analysis and processing software as well as the equipment of suitable communication protocols and services for the cooperative analysis and evaluation of seismic waves and time series of other parameters. Furthermore, more distant ranges of the sensor system are to be connected wire-bound or also using an existing network infrastructure (e.g. Internet) - thereby not losing its self-organizational character (Fig. 2). 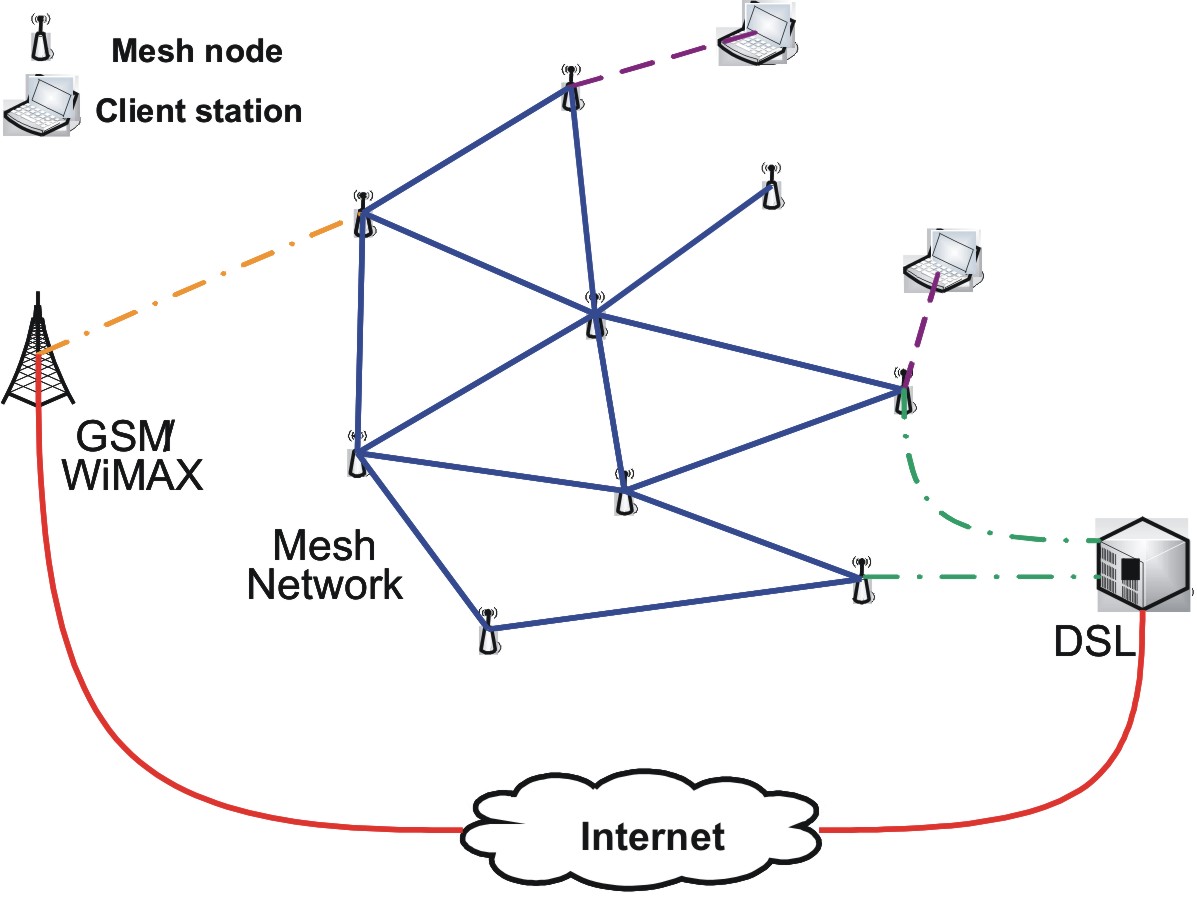 Part C:
The EDIM information and mediation system has to provide suitable information to various user groups, e.g. disaster management, politicians, authority, private people, and scientists. For this purpose, a geoinformation infrastructure will be established which is realized by components following actual ISO and W3C/OGC standards. Interfaces that have to link all components are to be implemented, too. For information mediation, a concept on personalized information processing and visualization will be developed concerning the different actors’ requirements on decision making and task execution. The concept will be derived from a requirement analysis and implemented by a visualization system.

The project will contribute to following major subjects:

Monitoring Systems: We bridge the gap between single station alarm systems and those requiring records from an entire network. For this, the Artificial Neural Network methodology (Böse et. al, 2005) is used, which allows to issue an alarm with one station, but upgrades it with each additional available record. In cooperation with the GFZ and the Humboldt University, we develop a fundamentally new monitoring and communication system based on low-cost, self-organizing recorders with high potential for applications in many places of the world.

Physical Models with Knowledge-based Components: We address the rapid inversion for source parameters as critical input of city-wide damage predictions for the forthcoming earthquake. We will study Neural Net methods, specifically adapted for the Marmara Region, which do not require velocity models, but need the incorporation of experience from previous events and simulations.

Uncertainties: Algorithms to be developed consider the degree of reliability of the information on forthcoming ground shaking and damage. For instance, the Neural Net methodologies developed in Karlsruhe allow enhancing the reliability of early warning with evolving time.

Information Systems: Utilization of spatial data in a regional intranet and the development of adaptive personalized visualization for the various users are innovative elements of the proposal. Data from self-organizing sensors in addition with further spatial information will be provided by an interoperable information infrastructure.