Will severe convective storms be more frequent in the future?

This question is addressed by many researchers, but also insurers fear increasing losses.

Severe thunderstorms are associated with lightning, heavy rain, squalls, and in some cases large hail and tornadoes. These weather events endanger human lives and repeatedly cause severe damage to buildings, infrastructure, vehicles and agriculture. Hail and heavy rain, for example, struck particularly hard in southern Germany in 2021, for example near Tübingen and Reutlingen on 23 June.
Whether severe thunderstorms will become more frequent and/or more intense in the future is particularly difficult to forecast – because none of the global or regional climate models can reliably simulate them. Therefore, researchers usually consider conditions leading to the occurrence of such extreme weather events and infer changes in the future.

CEDIM, in a project with insurance broker Willis Towers Watson and Columbia University, New York, is studying the frequency of severe thunderstorms in South Africa, a country where such events are particularly common. This is done using data from automated analysis of satellite imagery for severe convective storms. This method was originally developed at NASA (Bedka, 2011; Bedka and Khlopenkov, 2016), but has also been used to estimate hail frequency and risk of hail damage in Europe and Australia (Punge et al 2017, Bedka et al 2018). As a result, statistics on thunderstorm and hail frequency can be calculated over an 11-year period and typical environmental conditions for severe thunderstorms can be identified at the same time.

In addition, the working group "Atmospheric Risks" at the Institute for Meteorology and Climate Research (IMK-TRO) is testing various machine learning methods to infer severe thunderstorms from model data using appropriate proxies (indirect data). In this way, trends from different climate models and emission scenarios including significances and uncertainties can be estimated and compared. Initially, these methods will be applied to ERA5 reanalyses and evaluated with observational data from satellite imagery.
First results show that such proxies on local scales reach only low quality (e.g. Heidke Scill Score). On larger spatial scales, however, the quality of the prediction increases. In the climate simulations, the threshold value of the severe thunderstorm proxy is reached or exceeded 6 to 12 % more often per 1 degree of global warming (means: 6-12 % more severe thunderstorms). These results should still be considered preliminary, but they show that the climate system is also quite sensitive to increases in greenhouse gas concentrations with respect to severe thunderstorms. Past studies also suggest that the intensity of extreme precipitation events is particularly sensitive to climate (e.g., Lepore et al. 2015). In the further course of the project, a distinction will therefore also be made between different degrees of thunderstorm event severity; in addition, other regions will also be considered. 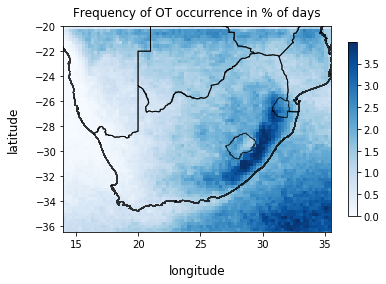 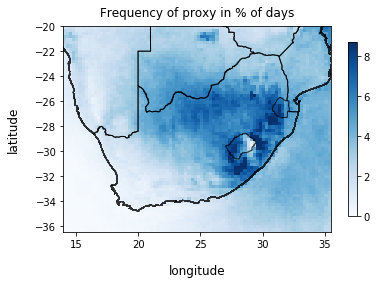 Fig.2: Percentage of days with likely occurrence of severe convective storms according to proxy in South Africa (2005-2018).