For decades, the occurrence of large-scale wildfires was more of a problem for Mediterranean countries such as Spain, Portugal, France and Greece. Every year, there are at least 50,000 forest fires in the Mediterranean basin and between 700,000 and 1,000,000 ha of forest fall prey to the flames (FAO 2006). As a result of climate change, the risk of wildfires is also increasing in Germany. Climate projections show an increase in temperature and a decrease in summer precipitation in many regions of Germany. This increases the probability that the number, length and/or intensity of dry periods will rise in the future (Bender et al. 2017). Long summer dry spells were a major cause of the particularly high number of wildfires in 2018 and 2019. The annually published forest fire statistics of the Federal Republic of Germany show that some of them were extensive and affected several hundred hectares of forest. In 2019 alone, more than 1,500 wildfires were recorded with a total affected area of more than 2,700 ha (cf. Fig. 1). This is the largest area in 27 years and significantly exceeds the long-term average of 812 ha (1991 – 2019). At the same time, the 2019 wildfires resulted in an estimated financial loss of 2.22 million euros (BLE 2020) 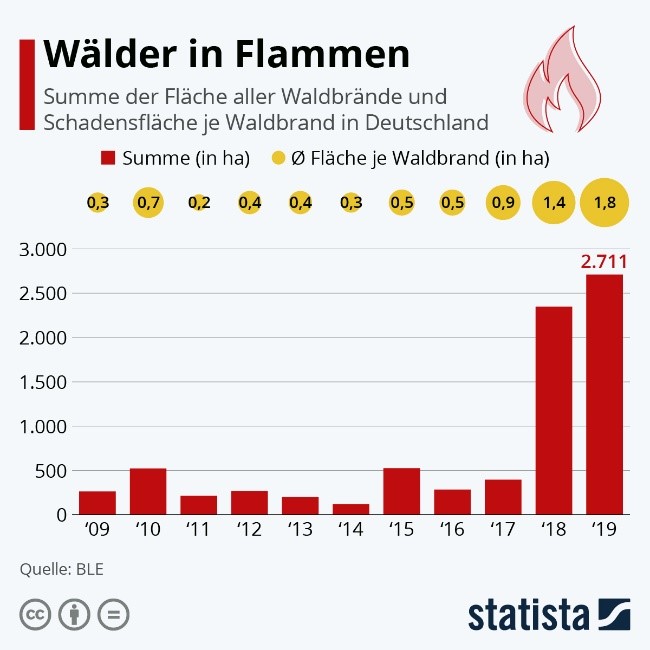 Climatic changes such as declining precipitation and increased temperatures in the spring, summer and fall months increase evaporation and drought, which can have a strong impact on forest areas. Risk assessments predict that the risk of wildfires in Germany will continue to increase in the coming decades (Umweltbundesamt 2020). As forest ecosystems have essential supporting, provisioning, regulating and cultural functions in the field of ecosystem services, they play an essential role that is worthy of protection in densely populated countries like Germany.

In the CEDIM-project „Wildfire risk in Southern Germany“ vulnerability functions or wildfire risk models will be developed to determine risks and forecasts that can help to derive measures to prevent wildfires. In this way, it is hoped to reduce the size and number of wildfires in the future, thus, to protect and preserve the forest. To this end, the forest- and deadwood-rich southern regions of Germany will be considered first.

In the first steps, a suitable data basis will be created. A loss database has been developed to collect data of historical wildfire events in Germany. So far, more than 250 events have been recorded that occurred throughout Germany. At the same time, a database for the local provision of public geospatial information of administrative districts and independent cities in Germany is under construction and a collection of open-source fire propagation models is already available. Further steps include the collection of data on critical infrastructure (fire stations, water networks, location of fire hydrants, etc.) and the classification of available fuels. Climate data and the implementation of climate models that consider climate change and the change in the Fire Weather Index represent another important aspect that will be covered in this project.

Associated institute at KIT: Institute of Geography and Geoecology (IFGG)